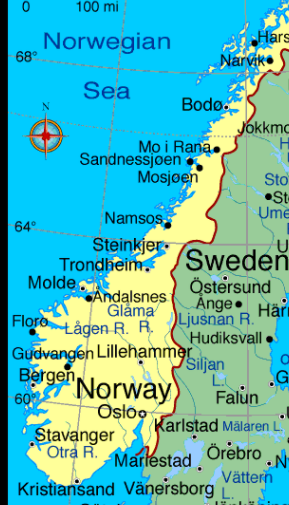 Ole Jensen (2xgreat grandfather) was born about 1813 in Monen, Gjerstad, Aust-Agder, Norway.  In 1835 he married Else Olsdatter (2xgreat grandmother) who was born in 1814 at Holte, Gjerstad.  Together they lived on the farm Kvenhusbraten (Skreme) in Gjerstad . In 1844 Ole Jensen (Monen) bought the farm Hagane in Gjerstad in 1844.  He owned the farm for seven years until 1851 when he had to leave the farm.  Their first child, Gunhild Olsdatter was born in 1836 on this farm called Hagane in Gjerstad.  On the 11th August 1855 the family moved to Smedsbukta in Kragero, Telemark, Norway.  At the time of Gunhild Olsdatter's wedding, who was their daughter, Ole Jensen was known as Ole Jensen (Hagane).   Gunhild Olsdatter married Christen Hermansen on 13th April 1871.  Another daughter, Ingeborg Olsdatter was born 1839 in Gjerstad and married Thor Thorbjornsen.
Gunhild Olsdatter was born 5 June, 1836 in Hagene, Gjerstad.  She died from heart failure on 17 November, 1917 in Solberg, Kalstadkilen, Kragerø.  She was buried on 22 November, 1917 in Kalstad, Kragerø.  Gunhild remained in Norway with her family.  We have found a descendant of Gunhild, Åse Inga Solberg born 1955 in Kragerø who is a DNA match to us.  Åse is one of many DNA matches we have on our Norwegian side.

You can read more about the voyage of "The Lammershagen" HERE

Ole Olsen (1x great grandfather) who was born in Kragerø, Telemark, Norway met Anna Marie Thorsen (1x great grandmother) on board the ship.  Within a week of the ships arrival, they were married at the Primitive Methodist Church in Rockhampton on 14th  September, 1871.It was on the 16th May, 1871 that the family departed from Hamburg on a ship called "Lamershagen" for Queensland, Australia arriving at Keppel Bay on 7th September, 1871.  It is said that two married daughters who did not immigrate to Australia, Gunhild and Ingeborg sat on the hill in Kragerø, Telemark, Norway watching the ship sail out of the fjord with the rest of the family.  The girls never saw their family again.  Other children to immigrate with their parents were Ole Olsen born 1845 (my great grandfather); Jens Olsen; Maren Sophie Olsen; Elvine Olette Olsen; Anund Hartvig Olsen; and Knud Hartvig Olsen.  Sadly, Knud Hartvig Olsen died on the ship as it arrived at Keppel Bay.  He is buried at Keppel Bay.

You can find a WikiTree link to Christian Andersen HERE.

Coming from a very cold climate could not have been ideal for the family.  The hot dry conditions of North Queensland would not have been an easy one to adapt to.  Less than two years after arriving at Keppel Bay, Rockhampton, and on 4th April, 1873, Ole Jensen died.  At this time the family were living near to Bowen, in Queensland.  It seems that Ole Jensen died of Lava Fever.  This is commonly known as Lassa Virus and is spread by mice.  An unpleasant ending for Ole to say the very least.  I have been unable to find the death of Else Olsdatter. 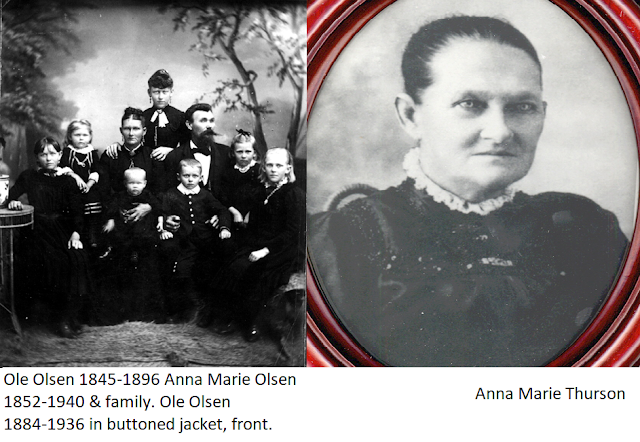 Ole Olsen and Anna Marie Thorsen (1xgt grandparents) began having their family from when they arrived at Bowen with their first born, Elisa born in 1872.  Following Elisa were Anna Florina; Oletta Maria; Elvine Albertine; Sophia; Ole Olsen born 5th October, 1884 (my grandfather); Annie Margaret; Rebecca Thomine and Thor Jens Hartvig and all were born at Charters Towers in Queensland.  The children of Ole and Anna Marie married the following-
I have many DNA matches from descendant's of the above families.
After settling in Charters Towers, Ole Olsen and Anna Marie bought a hotel licence for the Millchester Hotel in 1895.  Prior to this Ole Olsen was a miner at the Union Mine.  Luck was still not on their side because Ole Olsen died at the Millchester Hotel at Charters Towers on 26th March 1896 from acute diarrhoea and exhaustion.  The licence very quickly had to be sold for the family to survive but within a short time, Anna Marie had bought into a number of other hotels also renting out rooms.  I think she probably did quite well as gold had been discovered at Charters Towers in 1872.  I'm sure they knew of this once they started making their way up the coast of Queensland and it was the gold that took them to Charters Towers where the men could initially work at gold mining which probably helped get them on their feet.  Anna Marie Olsen (Thorsen) died on 24th November, 1940 age 88 in Brisbane, Queensland.
Charters Towers, the town they call ‘The World' was born to the sound of thunder and flashes of lightning.
Hugh Mosman, George Clarke, John Fraser and horse boy Jupiter had been prospecting away to the south of what is now Charters Towers when their horses scattered during a fierce thunderstorm. It was while searching for the horses next morning that the first Towers gold was discovered. The discovery point was just near the modern day intersection of Mosman Street, Rainbow Road and Black Jack Road and was at the end of the year 1871 or the very beginning of 1872.
The party returned to Ravenswood to register their find which they named Charters Towers.  A rush of ‘fortune seeking men' quickly followed and a small settlement named Millchester formed on the water at Gladstone Creek. By the end of 1872 some 3000 souls inhabited the new field. The alluvial men left early on for the Palmer River discoveries but the hard rock miners remained, seeking the gold in the deep veins underground. Charters Towers rather than Millchester soon became the main settlement. The goldfield did not reach its peak of gold production until 1899. During the period 1872-1899 the place changed from a rough settlement with bark and calico buildings to a thriving City of some 25,000 inhabitants.

PART 2 OF MY NORWEGIAN STORY

Ole Olsen was not the paternal grandfather I grew up knowing.  In 2015 I decided to test my autosomal DNA along with testing my brother and sister and a few cousins on this side of my family tree.  I also tested my brother's Y-dna at Family Tree DNA.  My paternal side was supposed to be very Scottish.  I remember my father just loving listening to someone play the Bagpipes.  The grandfather I knew had a Scottish father and an Irish mother.  I had even visited some family parishes when we had travelled to Scotland and Ireland.
Our DNA along with our DNA matches told another story.  I searched and searched for my maiden surname in matches trees but to no avail.  Also, the Y-dna didn't yield anything either.  Most surnames listed in the Y-dna for my brother had very Scandinavian surnames.
Momentum was gathering with my search for my mob.  Eventually, I rang a half paternal cousin and asked the question; "Do you happen to know who my father's father was?"  The answer came gently but swiftly.  "Yes I do." was his reply.  He said that his mother always told him that Arthur's father was Ole Olsen, a good footballer from Cairns.  I could have heard a feather drop.
In my mind, I was thinking, but, who was Ole Olsen, my paternal grandfather?
As Ole's parents had owned hotels in Charters Towers, he was well familiar with the dangers of drinking. As a young man, he learnt to play football and soon gained notoriety by becoming part of a team which were to become North Queensland Champions. I expect his fame and background led him into a fairly hectic life as the team travelled throughout Queensland playing football, leaving his wife and children alone.
Ole Olsen married Rose Ellen White on 26th February, 1910 at the Baptist Church in Charters Towers.  Ole was 26 years old and Rose was 19 years old.  Ole and Rose's first child, Ivy Amelia Olsen was born in 1911, soon followed by a son, Norman Ole Olsen born in 1912 and then followed by another son, Roy Ernest Olsen born in 1914.  But, during this time, Ole was playing football and travelling with his team regularly.  I believe that they eventually separated before 1920 as life became too difficult for both.  Sadly, when this happened, the children were split up.  Rose took the youngest son to New South Wales and then left their daughter with her mother at Rockhampton and the oldest son was left with Ole.  I doubt there was much supervision there for Norman in Townsville where the family had settled.
The crossing of paths eventually came about with Ole Olsen in Townsville, where my paternal grandmother, Dorothy Turner was living.  Dorothy Turner had earlier married Peter Bennett Christensen at the age of 15 in the Methodist Church at Chilligoe, Queensland. They married on 4th September, 1909.  Peter and Dorothy Christensen had three children together before separating.
On 27th August, 1920 Arthur John Christensen (my father) was born at Alderley in Brisbane.  As Ole Olsen was still married to Rose and Dorothy Turner was still married to Peter Christensen, there was no hope of a marriage to each other.  So, for seven years, my father lived with his mother in Brisbane where she was housekeeping.  On my father's birth certificate, the informant was William Andrew Hunter who also named himself as the father.  Fast forward to current times where we have DNA testing which proved William Andrew Hunter was not the father.  My siblings and I grew up knowing and thinking William Andrew Hunter was our grandfather.  DNA changed everything.  Ole Olsen died in 1932 in Townsville at the age of 42.
Numerous DNA matches soon confirmed Ole Olsen as being my biological grandfather and the father of Arthur John Christensen (Hunter).  As the Hunter family believed they were my father's family, the grandmother arranged to adopt my father when he was seven years old.  This was a formal adoption.  If only they had known back then, what I know now.
I have had contact with some of the Olsen descendant's who live in Australia. We were also invited to a reunion a few years ago which was lovely.
Gjerstad Hagane Holla Holte Kragero Lammershagan Monen Norway Nyhus Solum Telemark

Popular posts from this blog

He had a long war 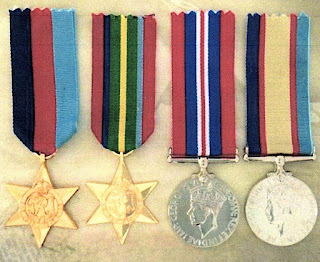 1939/45 Star; Pacific Star; 1939/45 War Medal; 1939/45 ASM Hughie Arthur John Hunter QX18621 Joining up to the Australian Military Forces was the easy part for my father who was only 20 years and 7 months old. These young men were very brave going into battle. Fighting a long war was the difficult part for Hugh Arthur John Hunter.  On his attestation form he is shown as a qualified baker and he lists his father, William Hunter as his next of kin which was later changed to his wife, Monica once they married on 11 September 1942 in Charters Towers, Queensland.  He had no experience of war except what he had heard of the First World War from his father, William Hunter who had fought in World War 1. Hugh Arthur John Hunter & Monica White Married 11 September 1942 Charters Towers, Queensland His years of war (some of his own words) He enlisted in Mackay on 1 April 1941 and was very quickly sent to the Exhibition Grounds in Brisbane where he was "issued up" and sworn in.  Some
Read more

Mary Mitchell - Who was Mary and who were her family? 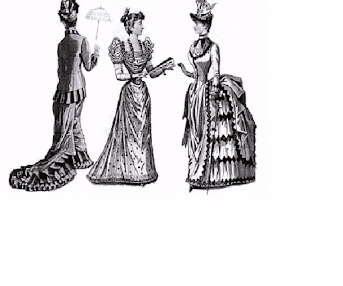 What fashion did my Mary follow? Image depicts fashions from the early 1880s Only snippets of information are known about my Mary, my maternal 1 x great grandmother. Known facts are:- Mary, having travelled 'Free', departed on the Scottish Knight from London on 20 December, 1877 arriving on Thursday 9 April 1878 at Keppel Bay, Rockhampton in Queensland.  She was single, a servant and 19 years old.  It must have been exciting to spend Christmas on board the ship. The newspaper article has been taken from Trove.nla.gov.au Daily Northern Argus (Rockhampton, Qld. : 1875 - 1896), Friday 12 April 1878, page 2 Scottish Knight arrival at Keppel Bay "The passengers were of reasonable condition and a highly respectable body of people who will be a great acquisition to this part of the colony".  Scottish Knight 875 Ton Iron Barque built in 1876 nla.gov.au/nla.obj-137298128/view Call-PIC/11436 LOC Drawer Store PIC/11436 She married James Nelson in Rockhampton in 1884 at age 27
Read more